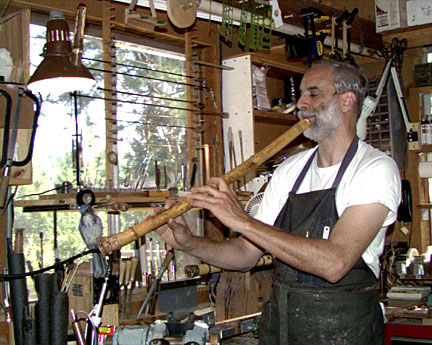 A bluebird visits the shakuhachi workshop and Tweets:
"His flutes are pretty good, but his playing is for the birds!"

Tai Hei Shakuhachi are made by Monty H. Levenson who maintains workshops at his home in the coastal foothills of Mendocino County, California as well as in Japan at the small farming village of Kitagawa (Tokushima Prefecture) on Shikoku Island. Monty has been making shakuhachi continuously since 1970. The name Tai Hei is derived from "Tai Heiyo Gawa" or the Pacific Rim. Both Monty and his wife Kayo, an integral part of this family enterprise, have their legs firmly planted on either side of the Pacific Ocean.

In 1984, Monty developed the Precision Cast Bore technology, enabling him to create affordable, high-quality shakuhachi made of bamboo. Tai Hei Shakuhachi are now being used by traditional teachers in Japan for their students and professional musicians worldwide as their personal instruments. Since its inception, aspects of this innovative new method of making high quality shakuhachi has been widely emulated by makers throughout the world. In 1992, Monty trained master craftsman Masuda Shuho in the process and helped to retool his workshop in Kawasaki, Japan. This partnership was cut short by Masuda’s untimely passing in 2000.

While self-taught as a maker, Monty Levenson has collaborated extensively with many prominent players and craftsmen around the world to help forge a synthesis of traditional and modern high tech approaches to shakuhachi making.. He works closely with John Kaizan Neptune, one of the most respected musicians and composers in Japan, whose pioneering research into the acoustical physics of the shakuhachi has been incorporated into the precision cast bore and jinashi flutes he makes. Monty has also learned all aspects of harvesting and curing madaké bamboo from Nakamura Ginetsu, a maker in Osaka for over 50 years, and one of the last remaining craftsmen in Japan harvesting all of his own bamboo. Monty has also teamed up with Roderic Cameron, one of the world’s premiere makers of 19th Century European Baroque woodwinds, to develop technologies related to the replication of historical and modern instruments. These endeavors have resulted in a unique laser tracking lathe, of which there are only two in the world, as well as a computer interface for measuring interior flute bore profiles with the utmost accuracy.

2002 witnessed a number of breakthroughs at Tai Hei Shakuhachi including the manufacture of jinashi chokan (long, natural bore instruments) and the Shakulute, a shakuhachi headjoint for the silver flute that has become very popular in Japan and around the world.

In 2004, Tai Hei Shakuhachi Publishing was officially launched with the aim of preserving and expanding access to information outside of Japan on shakuhachi craft techniques and the Zen-inspired honkyoku musical tradition. Several books and translations of rare masterworks, collections of sheet music, instructional guides, CDs and DVDs are produced and published at the Tai Hei Shakuhachi off-the-grid workshop in Willits, California.