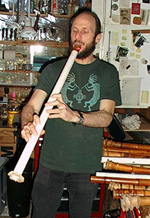 I've succeeded in mathematical scalingof my best gauge flutes to produce a 2.8" - Key of G at therequest of John Kaizan Neptune who has visited here twice in thelast year. Not all of the flute makers in Japan make these longinstruments, so good ones are hard to come by.

John and I have been getting togetherregularly over the last several years, either at my shop in Willitsor at his fantastic dome house in Japan. For a shakuhachi makerlike myself, it is an invaluable opportunity to collaborate witha player of John's caliber. (And one that speaks the same languageas I do, no less!) Our work pattern at these brainstorming sessionsusually takes us late into the night until weary from gazing intenselyinto those mysterious long black tubes. 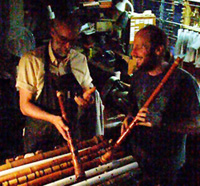 This summer's research was particularlyfruitful. The 2.8' I came up with was, according to John, concertquality. His expertise in fine tuning the bore has resulted inan instrument that is nicely balanced and very resonant in allof its notes. More important to my mind, is having establishedthe methodological framework for extremely accurate bore scalingand fabrication. 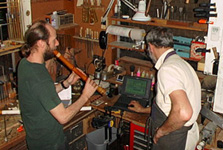 No simpletask, but one that is greatly enhanced by the use of computerizedcalculations and (hopefully) soon the aid of an inkjet plotterto generate precision scaled graphs. What can I say? It's a nastyjob, but somebody has to do it. Hope to have long, affordably-pricedinstruments in the keys of G, F#, F and E available in the nearfuture.