This web site is dedicated to researching the Secrets of "Zen Shakuhachi" & "Shakuhachi Zen". The fantastic, fairytale-like flute with the forged faith and the fundamentally falsified philosophy? What do the many surviving written Japanese source documents and plentiful pictorial evidence actually clarify to us about early "Fuke Shakuhachi" and "Zen Shakuhachi" history and ideology? The "Zen Shakuhachi Truth Research Web Pages" are critical Japanological research in progress.

Lauren Nagaryu Rubin, Ph.D
The Shakuhachi and the Didjeridu:
Two case studies of historical iconology, performance practice and their relation to avian respiration and song

This thesis provides case studies of two end-blown instruments: the didjeridu, an Australian Aboriginal horn, and the shakuhachi, a Japanese flute, focusing on the correlation between avian symbology, respiration and song and each instruments’ performance practices and history. Both instruments are depicted using avian iconology in the ancient art of their respective cultures: the rock art of the Northern Territory and the mandala art of Shingon Buddhism. Using a broad range of interdisciplinary data the thesis argues and concludes that the use of avian symbology was purposeful rather than coincidental, citing multiple analogies between avian respiration and song and each instruments’ playing methods and performance practices. Further, ancient avian iconology present in the Taizōkai mandala provides evidence of the early history of the shakuhachi as a hōki, or spiritual tool, of Shingon Buddhism. These findings provide an addition to the legend used by the Fuke sect about the shakuhachi’s early history, and give new evidence that the shakuhachi was first a tool of Shingon Buddhism before it was a tool of Zen.

An examination of the social construct of gender as manifested in traditional Japanese music, through the lens of contemporary shakuhachi (bamboo flute) performance, teaching and creative work done by Japanese women. Historical concepts of gender, in which representative male or female characteristics are extended to musical performance, are investigated to uncover processes of change in performance contexts.

The six Japanese women informants in this study live and work primarily in Japan. Data gathered via questionnaire from American, European and Australian women shakuhachi players is employed for the purpose of comparison with the experience of Japanese women players. The assertion of my paper is that Japanese women shakuhachi players are negotiating a new musical identity which reinforces their more independent role in Japanese society. As part of this process, a new aesthetic is emerging in both their musical approach to playing the shakuhachi as well as in their performance style on stage that shows innovation by women in a male-dominated sphere of Japanese traditional music.

Martha H. Fabrique holds a Doctorate of Musical Art from the University of Colorada at Boulder, and is both Associate Professor of Music and Chair of the Department of Performing Arts at Our Lady of the Lake University. She plays the flute professionally for several orchestras and ensembles in San Antonio, Texas. Dr. Fabrique is also a performer and scholar of the shakuhachii>, with over twenty years of experience with this Japanese instrument.

I can use a guy like him around the workshop. (To sweep the floor.)

In Classic vs. Modern Violins, Beauty Is in Ear of the Beholder
Nicolas Wade

Dan Ryudo Ribble
The Shakuhachi & The Ney:
A Comparison of Two Flutes from the Far Reaches of Asia 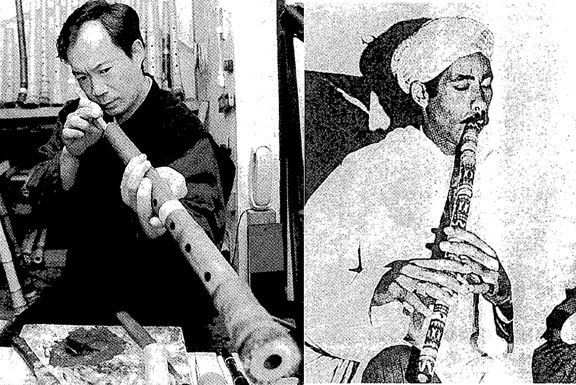 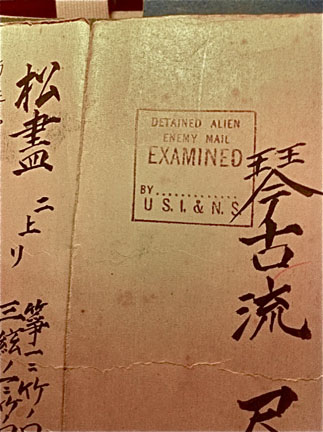 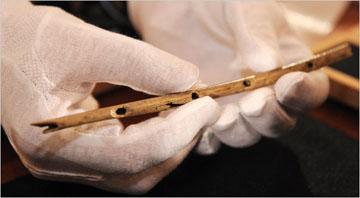 A map compiled by Steve Weiss and Yoshio Kurahashi

Dan Ryudo Ribble
The Other Side of the Pacific:
A Few Statistics and Observations on Shakuhachi Playing in Japan and in Kochi Prefecture

Dan Mayers is President Emeritus and founder of the Internatiional Shakuhachi Society (amongst other things.)

Steven Casano
From Fuke Shuu to Uduboo: Zen and the Transnational Flow of the Shakuhachi Tradition to the West
An Excerpt from his Thesis
As Nature Intended by Ray Brooks

"It's not the best time to stop someone when you stark naked and have just climbed out of the cold pool at Wilber hot springs. But I ask you, what would you have done if you had seen someone pass by with a Shakuhachi tube strapped to his back. How many Shakuhachi players do you bump into out in the wilds of California. Miss an opportunity like that, never. The flute carrier was with a woman and they were both fully clothed."

Washington Post Staff Writer Patterson Clark had a passion for the Zen instrument, so he sought its master in Japan.
Sunday, August 4, 2002; Page E01;
Streaming Video of Yoshio Kurahashi-sensei
Read the Sidebar that did not make it into the Washington Post Article 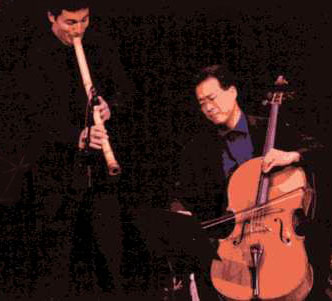 Although Japan is obviously the most Westernized country in all of Asia, Japanese people are known as being great guardians of tradition.  When it comes to music and all other forms of art, traditions are firmly and safely preserved, yet, as in all Asian countries, there is a decline; the youth being more interested in pop and rock music then their own traditions.  Modernization is surely a threat; but the sense of tradition in Japan is so strong that their traditional music will continue to thrive and, to a small extent, with the help of the West.

Wearable instruments that put chips in dancers' shoes, an orchestra on a sleeve and wireless duets on city streets.

"Professional musicians and performance artist are exploring interactive technologies more seriously, not to fill awkward silences but to delve into new areas of expression. Dr. Tomie Hahn, an ethnomusicology professor at Tufts University, is using technology to experiment with Japanese dance forms. In one of her dances, she personifies Pikapika, a Japanese word that means "twinkling." For her performance, Dr. Hahn wears an interface designed by Dr. Curtis Bahn, a researcher at Rensselaer Polytechnic Institute. It consists of sensors worn on the hands and feet, and small speakers strapped to the arms. As Dr. Hahn dances, her body is guided by the music of its own creation."

The Japanese Shakuhachi and the Western World
by Bruno Deschênes

An interview with
James Nyoraku Schlefer

Killing the Buddha: Form vs. Content in Hogaku
by Christopher Yohmei Blasdel

A Fool for Shakuhachi by Ray Brooks

The Sound of Zen. An article about Christopher Yohmei Blasdel from The Nation (Bankok, Thailand)

An Interview with Ronnie Nyogetsu Seldin
Getting to Absolute Music