Excavations at the early Neolithic site of Jiahu1,2 in Henan Province, China have produced what may be the earliest complete, playable, tightly-dated multinote musical instruments. Jiahu was occupied from 7000 BC to 5700 BC, considerably antedating the well known Peiligang culture3,4,5. Here we describe six exquisitely made complete flutes which were found in radiocarbon-dated excavation layers, along with fragments of perhaps 30 more. The flutes are made from the ulnae of the red-crowned crane (Grus japonensis Millen) and have 5, 6, 7 and 8 holes. The best preserved flute has been played and tonally analysed. In addition to early musical artefacts, the archaeological record at Jiahu1,2 contains important information on the very foundations of Chinese society. We describe the archaeological characteristics of the Jiahu site, details concerning its dating, its place in the prehistory of the Chinese Neolithic, the ethnicity of its population and the results of a tonal analysis of a nearly 9,000-year-old musical instrument found there. 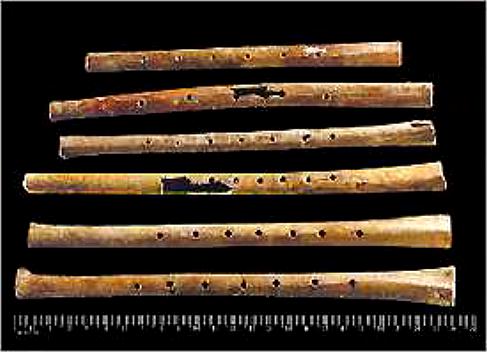 Jiahu lies in the 'Central Yellow River Valley'3 in mid-Henan Province, east of Mount Funiu and bounded by the flood plains of the Ni river to the south and the Sha river to the north. It was discovered by Zhu Zhi in 1962 but its significance was not fully appreciated until other sites related to the Peiligang culture3,4,5 had been excavated. Jiahu is an irregular ellipse, 275 m long (east-west) and 260 m wide (north-south). Below a modern agricultural layer of loess 0.3-1.0 m deep lies a layer of the Han Dynasty (206 BC-AD 220), and beneath this Neolithic layers which together are 0.5-0.9 m thick. Of Jiahu's 55,000 m2, only 2,400 m2 (4.4%) have been excavated, revealing 45 house foundations, 370 cellars, 9 pottery kilns, more than 300 graves and thousands of artefacts made out of bone, pottery, stone and other materials. There are three sub-periods at Jiahu; during the latest two the site shows distinct areas for residences, workshops and graves1. The differential furnishing of the graves provides evidence for early social stratification. Jiahu appears to represent an organized, well established sedentary village of long duration in the very early Chinese Neolithic.

The dating of Jiahu is crucial. So far we have determined twenty 14C dates: ninefrom charcoal (three in each of the three sub-periods mentioned above), five from plant ash, four from human bone, one from a whole fruit pit and one from a broken grain of carbonized rice. The conventional 14C ages range from 7,017 to 8,285 14C years BP. After dendrochronological correction the corresponding range is 7,700 to 9,000 calendar years BP or nearly 5700 to 7000 cal. (calibrated) BC. The three sub-periods are dated as follows: the oldest is 6600-7000 cal. BC; the second oldest 6200-6600 cal. BC; and the third 5700-6200 cal. BC. Thus, Jiahu spans some 1,300 years. If this range of dates is borne out by subsequent research, then Jiahu represents a Neolithic cultural phase distinctly earlier at its inception than the Peiligang culture, where the dates of many of the sites range from 5100 BC to 6300 BC3,4,5. On the basis of these dates, and considering the repertoire of ceramic shapes and stone tools1, we would tentatively characterize Jiahu as a culture parallel to, overlapping in duration, and very possibly related to, the Peiligang. The same might apply to the site of Houli in the eastern Yellow River Valley (north-central Shandong Province), dated 5000 BC to 6200 BC3. For the 14C determinations, see Supplementary Information.

A careful study of the bones of 400 individuals removed from more than 300 graves indicates that the Jiahu ethnic group may be identified with the North Asian Mongolian group, and also with the Xiawanggang and Miaodigou groups in Henan Province and the Dawenkou, Yedian and Xixiahou groups that were later found in Shandong Province. The range of male heights was from 170 to 180 cm. In the late Palaeolithic Zhoukoudian Cave, 'unspecialized' Mongoloids were described6. By the Yangshao period (3000 BC-5000 BC)7, the skull measurements are 'physically Chinese' and 'modern'6. The physical similarity of the Jiahu people to the later Dawenkou (2600 BC-4300 BC) indicates that the Dawenkou might have descended from the Jiahu, following a slow migration along the middle and lower reaches of the Huai river and the Hanshui valley.

The discovery of complete, playable multinote flutes at Jiahu presents us with a rare opportunity to hear and analyse actual musical sounds as they were produced nine millennia ago. Earlier flutes have been found in Neanderthal*(BELOW) contexts, but they are so fragmentary that it is difficult to do more than guess their tonal production8,9,10. We arranged to test one or more of the six flutes discovered at Jiahu; all are of the vertically held type (Sachs-Hornbostel11 classification 421.111.12).

The best preserved flute (M282:20; Fig. 1), which was free of cracks, was chosen to be tested using a 'Stroboconn' sound-analysing stroboscope, supervised by Huang Xiangpeng from the Music School of the Art Institute of China. This flute has seven main holes plus a tiny hole near hole 7. Two other seven-holed flutes were considered, but playing tests produced cracking sounds and were promptly discontinued. However, data were recorded for two players blowing twice each with their embouchures angled at 45· up and 45· down across the mouth of flute M282:20 (eight scales altogether).

Without testing more flutes, we cannot say whether the tonal scale of the bone flute of Jiahu (M282:20) is the ancestor of either the six-tone Qing Shan scale or the seven-tone Xia Shi scale; in any case, the latter two scales are only documented six millennia later. It should be possible, by constructing exact replicas of the Jiahu flutes in material whose density approximates bird-bone, to study the tonal sequences of all these instruments without endangering the valuable artefacts themselves. The carefully selected tone scale observed in M282:20 indicates that the Neolithic musician of the seventh millennium BC could play not just single notes, but perhaps even music. It is important in considering the possible role of these flutes in Neolithic society to recall that ancient Chinese tradition held that there were strong cosmological connections with music: that music is part of nature12. In this context, the performance of rituals and music were specifically associated with matters of state and sound government13.

Excavation of only a small fraction (<5%) of the Jiahu site has revealed that, by the unexpectedly early date of 7000 BC, a complex, highly organized Chinese Neolithic society had already begun to evolve employing multinote musical instruments. Future excavation and research should help us to understand the technical aspects of one of mankind's earliest practices of musical expression, which probably took place in a ritual setting.

Note added in proof: Flute M282:20 can be heard on the Nature web site. In the recording, made at the Music Institute of the Art Research Institute of China, Taoying Xu plays part of the folk song "Xiao Bai Cai" ("The Chinese small cabbage"). Recording engineer was Bobao Gu. Research for the recording was by Xiangpeng Huang (deceased), Xinghua Xiao and Zhongliang Tong.

Supplementary Information is available at Nature's World-Wide Web site (http://www.nature.com) or as paper copy from the London editorial office of Nature. References

Acknowledgements. This project was supported by the National Natural Science Foundation of China. In addition, C.W. was supported by the Department of Science & Technology of China, the Chinese Academy of Sciences and the Structure Research Laboratory at USTC. Research at Brookhaven National Laboratory is supported by the US Department of Energy. We thank Huang Xiangpeng of the Music School of the Art Institute of China who supervised these important tests and the personnel of the same Music School who carried them out: Xiao Xinghua, Xu Taoying, Gu Bobao, Tong Zhongliang, Qiu Ping and Liu Haiwang.

Nature Magazine
(c) Macmillan Publishers Ltd 1999 Registered No. 785998 England.
[Footnote numbers are not shown as raised numbers, but as: 1,2, etc.]

Hear the Flute Being Played After 9,000 Years