ORTHODOX HISTORIES OF THE SHAKUHACHI generally dwell upon the evolution of this five-hole bamboo flute in its later manifestations, after reaching the shores of Japan near the end of the 7th C. A six-hole, end-blown instrument which originated during the Tang Dynasty in China is thought to be an early forerunner of the modern shakuhachi. Its reedy voice can be discerned in gagaku, the orchestral music of the Imperial Japanese Court. Much later, during the Muromachi Period (13th-14th C.), a short, single-jointed flute called the hitoyogiri (also thought to have emerged through China or southwestern Asia) gained popularity amongst a class of beggar priests. Some ethnomusicologists trace the evolution of the shakuhachi back much further, to the banks of the Nile in ancient Egypt, and follow its movement east across the Iranian plateau and India via the Mohammedan Empire before reaching China. A jump across the Sea of Japan, however, was most decisive to this end-blown bamboo flute which reached a critical phase of development in feudal Japan destined to define its character forever. During the Edo Period (mid 16th to 17th C.) the shakuhachi was favored by a group of disenfranchised samurai warriors known as komuso. These mendicant Buddhist priests wandered the streets and countryside with large baskets called tengai covering their heads to symbolize spiritual detachment from the world. A group of komuso in Kyoto established the Fuke sect at the Meian Temple and began to use shakuhachi to solicit alms and as a tool for meditation. It was in the hands of these ronin turned "Priest of Emptiness and Nothingness" that the shakuhachi was redesigned from the heavy root of madaké bamboo - a form which the modern instrument has retained to this present day and one closely associated with a traditional aesthetic considered to be uniquely Japanese.

With such a long evolution - so much of it linked to traditional Japan - it is interesting to observe the renaissance which shakuhachi is currently experiencing here in the "New World". In a society barely in its infancy, by Japanese standards, one finds shakuhachi beginning to occupy a small but important niche on the American cultural landscape. And, as media headlines declare each day with mind-numbing redundancy, it is a place shared and contrasted with a host of phenomena that point to a spiraling moral anomie unprecedented in our modern history. Broken families, drive-by shootings, homelessness, extremes of violence and poverty in face of unmitigated wealth and excess are just some of the social dislocations that indicate a growing alienation from the ethical underpinnings and institutions which have governed our moral lives for generations. People in America are increasingly turning inward and outward toward older traditional cultures for a hint to solving some of the fundamental problems they face. In this regard, shakuhachi is neither special nor unique, but part of a growing interest in ancient forms and practices that have gained the attention of many who are seeking old answers to some very new questions.

AS A MAKER OF SHAKUHACHI in a "bamboo desert"— a place where the resource is virtually nonexistent—and having my own craft evolve almost completely outside of the traditional context, my mind often wanders to a mythical time and place where shakuhachi (in its broadest sense) encounters neither constraints of a distinctive cultural form nor a set of fixed ideas defining what it must be. This imaginary time is, perhaps, one where the primordial past meets a shrinking vision of our future in which the entire planet can be held like a ball in the palm of one's hand. Shakuhachi is often referred to as the "sound of nature." In Japan, its "original Zen music" (honkyoku) is filled with echoes of forest and sky. Will this sound, I wonder, traverse a time before history to convey our distinctly human, inner archetypal voice? A voice reflecting more than the natural world to encompass our very place in the universe? Cutting loose, going far back (or ahead)—in any direction away from orthodoxy—may just make it possible to intersect the evolutionary time line at a point yielding some illuminating insights relevant to our present condition as a species.

It is often after attending a concert of traditional music, hearing critical comments about a performance, piece or style of blowing, or discussing the politics, personalities, and organization of shakuhachi, that these musings come to mind. If "blowing shakuhachi" is indeed synonymous with sui Zen ("blowing Zen")—as one finds carved in stone at the entrance to Meian-ji temple, as well in the liner notes of so many shakuhachi CDs—can there be such a thing as "good" or "bad" blowing? Where do suspension of judgment and "beginner's mind" fit in? Why are there so many competing schools in Japan, each with a complete arsenal of sectarian views, secrets and fundamentalist approaches? If, indeed, form is emptiness and emptiness form, why has the iemoto system with its rigid hierarchy of masters and grand-masters emerged as the predominate paradigm for the organization of this traditional enterprise? Why is access to such valuable information so proscribed and expensive, not to mention licensed? I suspect that these questions are endemic to the human condition and have more to do with issues of ego, power, and organization than we might care to admit or delve into right now. What stands in sharp contrast to the haze generated by such inquiry is the tremendous vitality and enthusiasm one finds associated with shakuhachi thriving outside of its traditional context amongst those who are culturally uninitiated and largely unfamiliar with its basic premises. This, I suspect, is no accident. 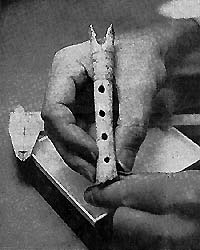 Let's regard shakuhachi, for the moment, strictly as a means to access information. Going back to a time well before the komuso monks wandered the narrow streets of Kyoto— thousand years ago to the prehistoric caves of Lascaux in France as well as neanderthal habitats throughout Europe—we find artifacts that represent the earliest archeological evidence of human music. Ancient end-blown bird or bear bone flutes with four to six holes, antecedents  in the evolution of the modern shakuhachi. (See Los Angeles Times. December 23, 1991.) Envision a mythical forebear courting the impulse to etch the sound sculpture of his habitat with the hand of a tool maker. Call up that ancestor who first heard the wind as music and was impelled by some great force to recreate that sound with breath and bone or, indeed, with bamboo. In this scenario we can see shakuhachi totally and purely as a tool for self knowledge. Dispense with form, ideology and, surely, with icon and regard blowing through the emptiness of a hollow tube as a reflection pointing back to one's place in the cosmos. Breath transformed to sound goes out to the world, but also loops back to the player. It becomes a microcosm of the universe with the urge to blow as the catalyst. Here shakuhachi becomes an instrument in its strictest sense, a tool to access, directly, a sense of place. No form, no tradition, no hierarchy, no licensed masters required. (Not much has really changed in these millennia.) Just add breath!

Returning home from my frequent travels to Japan, I am often left with a sense of having visited some indefinite past while simultaneously glimpsing an equally mystifying future. This uncertain feeling is immediately obscured as I am hit by the culturally diverse, in-your-face, shoot-from-the-hipness which characterizes the America I inhabit. The jumble of impressions soon dissipate as I roll open the doors of my workshop, mount the bench and begin to carve and shape the bamboos once more. Home again. Then the phone begins to ring, letters arrive and the e-mail flashes across the screen. Mostly voices of those sharing new encounters with this remarkable tool. Seldom are these voices casual, but rather filled with excitement, wonder and enthusiasm, relating tales of some newfound wisdom or unanswered questions. Residing close to the hub of the informational wheel that is shakuhachi, I am a privileged repository of these wonderful stories, musings, and reflections. These are tales of shakuhachi on the periphery of its evolution here in the West: a street musician

blowing for over two decades at a San Francisco subway station, a worker with the homeless in New York City, a recovering alcoholic and cook in Minneapolis, a teenager defining his own right of passage as a flutemaker, a sculptor in rural Georgia, and a political prisoner who has spent three quarters of his life in a maximum security prison are amongst the many folks who are rediscovering, redefining and revitalizing this time-honored form. Také no michi, the road of bamboo, is a path which follows no prescribed direction, but still can be traced from prehistoric caves in Europe through Asia to the American frontier and beyond.

ALL OF THIS BY WAY OF introducing Mr. Veronza Bowers, Jr. aka #35316-136, an inmate at a Federal Medical Center in Butner, North Carolina U.S.A. I have known Veronza for over thirty years after he first wrote to me requesting information about shakuhachi. I often receive such letters from convicts who have been filling the growing number of prisons cropping up throughout the American heartland, many of whom have begun to explore the practice of Buddhist meditation. I respond to all of these requests and usually follow up with a flute if the prison authorities allow the inmates to keep a musical instrument in their cells, although this privilege has been largely evicertated as the American prison system morphs from rehabilitation to Biblical retrubution. At that time, Veronza was incarcerated at the U.S. Federal Penitentiary in Leavenworth, Kansas where he had been serving a life sentence for murder since 1970. I hasten to add that Veronza was a member of the Black Panther Party in the San Francisco Bay Area during the early Seventies, and has consistently proclaimed his innocence of the crime for which he was convicted —even at the expense of having his appeals for parole denied—for which an admission of guilt might have worked in his favor. The experience of the Black Panther Party, targeted by the FBI and Federal Government during an era of intense opposition to racial injustice and the War in Vietnam, is an chapter in American history that bears careful review. Veronza is a musician, has been studying a variety of Asian healing arts—including shiatsu, acupressure, tsubo and massage therapy—and has a strong interest in Buddhist meditation as well as "hands-on" healing techniques which he practiced at the various facilities in which he has beenincarcerated. Veronza is also an honorary elder of the Lompoc Tribe of Five Feathers, a native American spiritual and cultural group.

Over the three decades that I have known him, I have made Veronza three flutes and am presently working on a forth. (The bamboos keep splitting in the harsh prison environment.) Shakuhachi has become a strong focus in his life and healing work at the prison. Not only has he developed unique abilities on the instrument, but has composed new music for shakuhachi and organized a Rastafarian Mediation Group which centers its practice around the shakuhachi. The article which follows describes, in words and pictures, aspects of the spiritual practice developed by Veronza and this group.

The Journey of Three Tai Hei by Veronza Bowers, Jr.