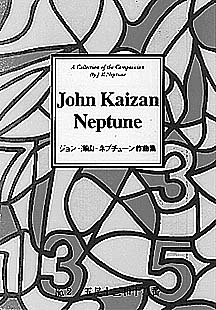 A prime number is a whole number that cannot be divided without a remainder by any whole number except itself and one. Of course prime also means first in rank or importance, original, fundamental. It just so happens that the traditional Japanese instruments used here all contain prime numbers: 3-stringed shamisen, 5-holed shakuhachi, 13-stringed koto, and 17-stringed bass koto. 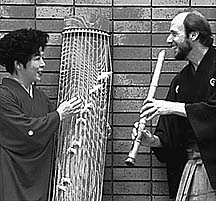 This also points to a basic fundamental of Japanese arts in general: things are deliberately simplified, often understated, to create a very special kind of space. This is true of traditional Japanese music and the instruments themselves . . . we have ten fingers, why only five holes on the shakuhachi? The contemporary music recorded here covers a broad range of textures some of which have definitely not been deliberately simplified. As with much of my music, there are influences from many parts of the world  --Japan, Europe, India, and Africa. You can find free rhythm, odd meters, polyrhythm, polyphony, pentatonic and diatonic scales, and even an imitation of African Pygmy yodeling in five.

But one thing you won't find is improvisation. This is the first time in more than fifteen years of recording my own music that I've done a whole project with no improvisation. Yasuko Watanabe and I specifically composed our solos for Canyon View and Moon Spirits in the hope that other musicians not familiar with improvisation (which is not part of the Japanese tradition) might be more comfortable performing this music. All of the scores are available in Japanese or Western notation. This is not to say you won't hear any freedom on this recording. The Japanese instruments lend themselves to a broad spectrum of personal expressions and tone colors.

CANYON VIEW
A work commissioned by Yasuko Watanabe and her students. Their request: write a tune using a pentatonic (five-tone) scale, the idea being that this would be easier to improvise with as the familiar traditional Japanese music is also pentatonic. I used a different pentatonic scale for each of the three movements, each one has only one note change half-step. I was still searching for a title when I had a chance to visit the Grand Canyon (Arizona, U.S.A.): each view point is quite unique though separated by a short distance, and I thought it was similar to the piece I wrote  -- it's all pentatonic, but go a short distance and it's a completely different view. PN-1  MOON SPIRITS
This tune was specifically written for this recording. The three koto parts work well with fairly distinct ensemble function -- lead/solo koto, rhythm/harmony koto, and bass koto. A bass 2.4 shakuhachi and a standard 1.8 shakuhachi are both used. PN-2  ROOTS AND BRANCHES
The first movement is from shakuhachi "roots": traditional honkyoku - Japanese scale, free-rhythm, importance of space, deliberately simplified. The second movement has European "roots", specifically, music inspired by 16th century counterpoint. Hermann Battenberg introduced me to some beautiful choir recordings of works by Palestrina and I thought music like that would sound great on shakuhachi too. The last movement features a more rhythmic (American?) branch with some Japanese folk scales thrown in for flavor. Scored for 1.6, 1.8, 2.1 and 2.4 shakuhachi. I recorded all four parts. This was quite an engineering feat considering we had only two 2-track digital recorders and still managed to record everything in stereo. PN-3  GOING TO TOWN
This tune is the musical story of a person traveling from the country to a town for the first time. It starts with a prayer for a safe journey: free-rhythm solo shakuhachi using the country folk scale (yosempo). Traveling along at a nice walking tempo, the tune continues using the folk scale. When contact is made with the city it has a tremendous, percussive impact on the traveler. This is followed by a slow, somewhat somber melody using the city scale (insempo). Later, after appreciating the rich variety of things happening, the country person is now able to enjoy the fast pace and international flavor: a faster tempo and other tones besides the Japanese scales are used. PN-4  FIVE AND THIRTEEN ARE PRIME NUMBERS
This is the first duet that I wrote for koto and shakuhachi. Musical influences are from Japan, India, America (blues) and Africa. How did I come up with the title? I thought it was more interesting than "Duet For Koto and Shakuhachi Number 1". PN-5