“Hidden Legacy: Japanese Traditional Performing Arts in the World War II Internment Camps” is the full title of this documentary, using historical footage and interviews from artists who were interned to tell the story of how traditional Japanese cultural arts were maintained at a time when the War Relocation Authority (WRA) emphasized the importance of assimilation and Americanization. Various essays and studies concerning the camps have been published, but have focused on the political and legal aspects of the internment, while hardly mentioning cultural and recreational activities in the camps. When cultural and recreational activities have been documented, they have focused on American culture, such as baseball and swing music. This film will be the first major presentation of the existence of traditional music, dance and drama in the camps. It is possible only because Shirley Kazuyo Muramoto-Wong has been searching, researching and collecting for over 20 years information on who these artists were. She has collected interviews, oral and visual histories, as well as artifacts from the internees and relatives of internees, including teachers, students, the performers, and the incredible artists who made instruments, costumes, and the props needed for a full performance from scraps of wood, toothbrush handles, gunny sacks, paint, and whatever they could scrape up. Her own family’s history with the camps led her to become a kotoist and teacher of the Japanese koto (13-stringed zither).

Very little is known of the existence of traditional Japanese performance arts in the camps. The artists Muramoto-Wong has interviewed are all Americans, all born here, but practiced Japanese arts before the war, during, and after the war, because they loved the art. This made them “social activists” in their own quiet way, continuing the music and dance they loved, helping others to learn and enjoy these arts, and to help draw their attention away from their surroundings, giving them pride and self-esteem. Their efforts kept Japanese cultural arts alive in our communities today.

We have interviewed 30 artists in the fields of music (koto, nagauta shamisen, shakuhachi, shigin, biwa), dance (buyo, obon) and drama (kabuki) who were interned at Tule Lake, Manzanar, Amache/Granada, Rohwer, Gila River, and Topaz. We have interviewed Prof. Minako Waseda of Geijutsu Daigaku University of Music and Arts, and Kunitachi College of Music, both universities in Tokyo, whose research thesis, Extraordinary Circumstances, Exceptional Practices: Music in Japanese American Concentration Camps, had written the only scholarly work that had been published on this subject. We are also interviewing students of these arts in America, some who learned from these artists, and some who are carrying on the tradition in our communities today, and some who have taken this knowledge, and expanded creatively and artistically in various imaginative ways.

Complete information about this project can be found at the
Hidden Legacy Web Site
jcalegacy.com 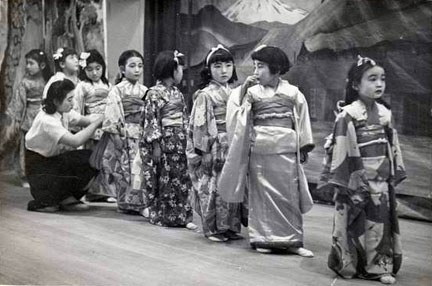 Sahomi Tachibana preparing her students for performances at Topaz,1944. 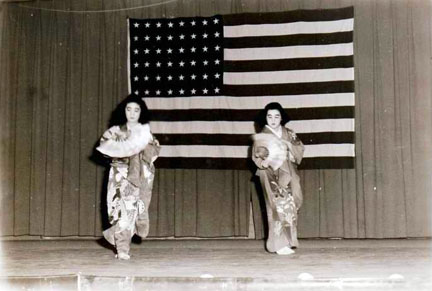 This film will be the first major presentation of the existence of traditional music, dance and drama in the camps. It is possible only because Shirley Kazuyo Muramoto Wong has been searching, researching and collecting for over 20 years information on who these artists were. She has collected interviews, oral and visual histories, as well as artifacts from the internees and relatives of internees, including teachers, students, the performers, and the incredible artists who made instruments, costumes, and the props needed for a full performance from scraps of wood, toothbrush handles, gunny sacks, paint, and whatever they could scrape up. Her own family's history with the camps led her to become a kotoist and teacher of the Japanese koto (13-stringed zither). 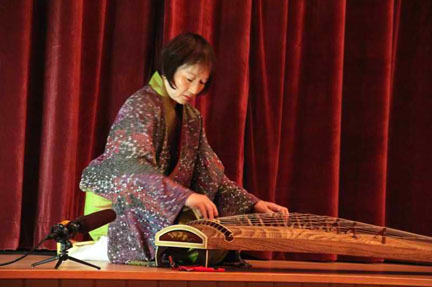 "I've been playing the Japanese koto (13-stringed zither) for over 50 years since my mother first taught me how to play this instrument. My mother learned to play the koto in "camp", as she would tell me while I was growing up. This camp, I found was not a sleep-over camp as we commonly know it, but a prison camp during World War II, where over 120,000 Japanese Americans were sent, stripped of their lives, homes, work, businesses and imprisoned in these camps, located in isolated deserts or swampy areas. They could only take with them what they could carry....

"Growing up, I used to wonder, did my mom bring a 6-foot long koto into camp? Did anyone else have a similar experience carrying their instruments, costumes, props? Were there others who learned Japanese arts? I became really curious and started to read books, research the museums, but found little information. Most of what is documented about camp life are the American activities, like swing music, baton twirling, or sports, like baseball and football, because that was very popular then, and just like all Americans, they enjoyed what was "in" at the time. So, this is where my journey began. I started looking for people who might have done or learned Japanese traditional arts in the camps, such as Japanese music and dance, Kabuki and Noh plays, and gathered and recorded interviews as I located people. I realized there were quite a few people who did Japanese arts in all the camps, but there was little information about these activities, and, of course, there was practically nothing written about the camps in the history books. I felt their stories needed to be told.

"Camp was prison. This was apparent to no one more than the Issei, or first generation immigrants from Japan, who were the most affected, as they lost their livelihoods, work and their homes. There were different modes of survival, and the Japanese arts helped them forget they were in prison for a while, and it also created an opportunity for young Japanese Americans to learn a cultural art. For some, art might be a necessity, but here in the camps, art was survival.

I've interviewed close to 30 people, and they are very rich stories that I feel must be told. Most of them are artists and teachers who practiced the arts in the camps as well as students who learned from these artists. The camps happened over 70 years ago, and I feel the urgency to capture these stories from the survivors of the camps.

""We visited 4 of the camps, and interviewed close to 30 people, including artists from the camps, and students who learned from them during and after camp. We are running out of funds, so that's why I'm launching this campaign to try and raise more funds to cover the costs. The goal is to get it on public TV stations across the country, have it available for viewing at the camp interpretive centers, and design and produce the DVD for sale. Any funds we raise over the goal will go towards upkeep of the Hidden Legacy website, where we hope it will become a resource for anyone interested in traditional Japanese arts in the camps.

"Anything you can contribute will be greatly appreciated, with perks that you can see on the Indiegogo site. And please share this with anyone you know who might be interested in this. 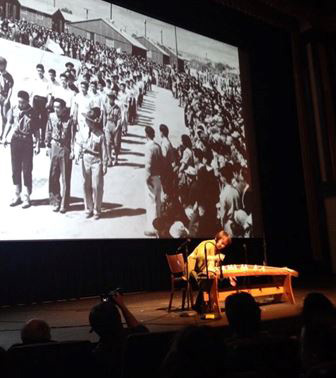 Shirley and survivors of the Internment Camps performed at the film's opening.

This DVD is also available through Tai Hei Shakuhachi.
All proceeeds go directly to The Hidden Legacy Project Fund.